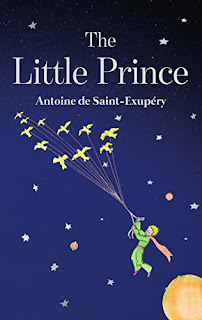 Author Bio: (from book) Antoine de Saint-Exupéry, born in Lyon on 29 June 1900, was a French writer and aviator. In 1921, he began his military service and trained as a pilot and at the outbreak of the Second World War, he joined the French Air Force flying reconnaissance missions. Later, he joined the Free French Forces, but while flying a mission in Rhône valley on 31 July 1944, he disappeared and was never seen again. It was assumed that he was shot down over the Mediterranean. An unidentifiable body wearing French colours was found several days later and buried in Carqueiranne that September.

Book Review: "The Little Prince" by Antoine de Saint-Exupéry is a work of classic fiction that entices the young and old alike. It is a story that makes readers think beyond imagination, often questioning the everyday actions routinely undertaken by people aimlessly. There are many morals hidden between the pages which reflect upon the meaning of life and what it means to truly uncover hidden messages from our everyday behavior.

The narrator, during his childhood days, painted a boa snake who had just swallowed an elephant but the adults dismissed it as a hat. He blamed the lack of imagination among adults and later went on to become a pilot. He and his plane get stranded amidst a desert in Africa where he meets the Little Prince who comes from a small planet having three volcanoes – two active and one extinct, as well as a flower. The Little Prince describes his journey of traveling to six small planets each inhabited by a king, a show-off, a businessman, a drunkard, a lightkeeper and a geographer before stumbling upon Earth! Each of his visits has a hidden message where the Little Prince blamed adults for lack of imagination. Even while on Earth he first made friends with a flower and a fox. The narrator is quite amused by his tales and develops a deep bond with the Prince as he repairs his plane day by day.

This book will appeal to classic fiction lovers who love reading fiction with a moral. The author has skillfully crafted a plot making his observations on human society through the adventures of the Little Prince. The climax is full of sentiments as his journey back home approaches while at the same time he steps further and farther away from the Prince. However, the narrator takes home with him a lot of memories that are sure to last an eternity among the laughter of stars in the sky!