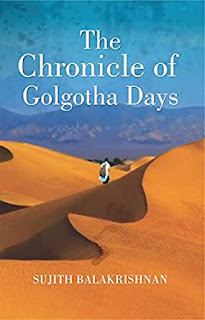 Author Bio: (from book) Sujith Balakrishnan was born in Kerala, India. An engineer by profession, he lives in UAE. This is his Debut Novel. He can be contacted at - sujithwriter2018@gmail.com

Book Review: "The Chronicle of Golgotha Days" by Sujith Balakrishnan is a novel that shakes the readers from inside. It is based on actual events that took place many years ago and is a retelling in the first-person narrative of the horrific rape of a 16-year-old girl that happened almost two decades ago. The author has written this novel to highlight the helplessness of Abhaya (a fictional name given to the victim of Suryanelli rape horror) and her family. It exposes the shams in the judiciary as people keep on waiting while years keep passing. Justice gets delayed and at times denied too.

The novel begins abruptly as Abhaya boards a bus taking the readers to her world of wishes and hope. She loves a bus conductor who in turn loves her gold and silver. She decides to elope with her greedy lover, unknown from his intentions. However, she is betrayed and left alone in the world to survive. She was lured into the trap and then pushed into prostitution. Abhaya tells the readers how she was regularly raped by 40 people in 26 days at different destinations. There were people from different walks of life – politicians, advocates, officers, and others. She died within herself because she put her trust in someone in the name of love. The novel powerfully unmasks the perverse mindset of people in power, possession, and luxury. Other than exposing the people with a lust for the body, the novel also exposes how people use the purity of the idea of love to grind their axes.

This novel will appeal to readers who want to read fiction with a purpose. The author has used the narrative wonderfully to rewrite the pain and horror through which the girl might have gone. Though written by a person who is just letting the world know the story, the novel seems more like coming from the victim herself. It is all about a chronicle of the days spent in horror and pain by Abhaya. Written from her perspective only, the story further connects the readers as they can easily feel the pain of a victim once in love.