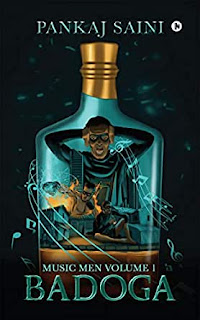 Author Bio: (from book) Pankaj Saini is a lazy techie and an enthusiastic traveller. He finds old religions and myths fascinating. He has a keen interest in music, which features in most of his works as a central theme. In fact, he believes that music is the only true form of transcendence.

In this series, he tackles many a supernatural phenomenon to create the eccentric world of the Music Men. Through their exploits, he offers a modern saga that has arcane origins and an alternate, yet entirely plausible, future for mankind.

This is the first story in the series and also his first published book. He lives in Bengaluru with a drum kit. Quite often, he can be spotted alone at cafes and pubs working on his bizarre theories.

Book Review: "Music Men Volume I: Badoga" by Pankaj Saini is an action-adventure superhero fiction based on the fact that an individual can always become more than what he is capable of. Life gives us many choices to prove our worth and when the opportune moment comes, we must not relent in making the best possible decision for us. But things are easier said than done! Yet music has always existed to soothe our mind during a crisis.

Sartaj, the protagonist of the story, finds himself contemplating the younger version of his life. An amateur boxer and engineer from Haryana, he is a conflicted man trying to find a more meaningful version of himself down south in India's Silicon Valley. His twenties are riddled with sex, money, liquor, and even love but not ever quite feeling satisfied or whole as a human being. Contentment in life is a far fetched dream. From terrifying nightmares to weird voices in his head, his bizarre experiences make him question his existence. Therefore, at thirty, he is on a quest for something meaningful and puts on the mask of a brave vigilante calling himself a superhero: Badoga. But can he really overcome his past? Who are the Music Men? Are they taking advantage of Sartaj? Can he free himself from the web of entanglement or does he continue falling into the depths of his own actions? Read to find out.

This book will appeal to action-adventure lovers who believe in the world of fantasy superheroes. The book is surely a reflection of modern society where a lot of people are not content with their lives. However, the author urges us to try at least into becoming something more than our usual selves. There is always a path for redemption and it is best left open for our own intuitions to comprehend when we face an existential crisis. This thought in itself is marvelous.