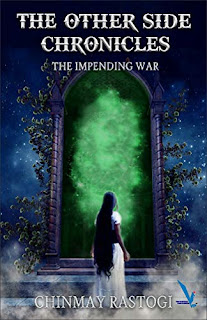 Author Bio: (from book) Chinmay hails from Jaipur and is lucky to belong to a loving family. Just like his hometown, he likes to take things easy and add colour to the life of those around him. This is his second novel.

Book Review: "The Other Side Chronicles" by Chinmay Rastogi is a fantasy fiction revolving around our world and the Other Side. The intricate details of the setting, time and place of the Other Side leaves one mesmerized. The author has used his vivid imagination to create a wonderful plot that involves thrill, suspense, action, adventure, and tonnes of mystery. What makes this book worth reading is the mission undertaken by our protagonists, Mohan and Tina, to thwart the impending war as the title suggests, amidst fear, hope, and betrayal.

In the beginning, Tina suffers from Medulloblastoma and is undergoing treatment in Kolkata while Mohan has just escaped from a psychiatric facility in Shimla. However, mysterious beings prompt Mohan to meet Tina in order to return back to the Other Side in order to save Vishnu, Mohan's long lost friend. Our protagonists find themselves trapped in the hands of the Reinstators after entering the portal into the other world. It is here that Tina learns about the feud between the Founders and the Scribes, the natural role of the Reinstators to rebuild balance by destroying everything, and the role played by the Elders to instigate the return of the one called 'Prince'. All the captives - Mohan, Vishnu, Tina, and their allies, Sai and Icarus - find themselves unable to avert the sinister mission of the Reinstators to bring back the lost weapon called the Restorer from the original parchment called 'Mutal Sastra'. It seems to be the beginning of the end!

This book will appeal to fantasy fiction lovers since it has a wide range of characters hailing from different backgrounds. Certain imaginary concepts from the author, like the role played by shadows and how one's shadow disappears when he is completely consumed by evil, deserves appreciation. What is the connection of Mohan and Tina with the Other Side? Have they been there before? How can they prevent the impending war while being prisoners to the enemy? All these questions and many more adventures await, as the author takes us on a journey through time and space along with the promise of a sequel into the Underworld!