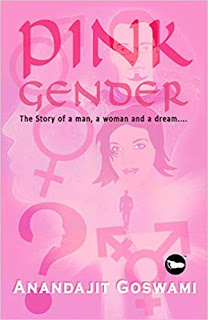 Author Bio: (from book) Anandajit Goswami was a faculty at TERI School of Advanced Studies. He completed his Master's degree in Economics from Jawaharlal Nehru University, New Delhi and has obtained PhD in Energy Economics and Policy from TERI School of Advanced Studies. He has co-authored, co-edited academic books, published academic papers, popular articles and also co-authored and authored two sci-fi books titled 'Lucy meets Artificial Intelligence' and 'Lucy and the Train: Tryst with Sustainability'. His latest upcoming novel fiction is - "The Rise of the Club of Central Tendency". He lives with his mother in New Delhi.

Book Review: "Pink Gender" by Anandajit Goswami is a reminiscent thriller based on the lives of a man, woman, and transgender. The story begins with the introduction of how these three lives are interconnected with the movie PINK starring Big B. The setting becomes clearer as the story concludes but it is interesting to note how the characters reminiscence about their past as they sit in the police station after a minor accident. The author has carefully crafted a setting which forebodes the opposite roles played by different genders.

The three main characters are sitting at the Police station waiting for the IO to record their statement. Shapno, the transgender among the three, begins with his story of college days and present. It is a story of a struggle trying to prove one's identity and proving one's taste for freedom. Shapno had to face society at large for his effeminate ways but when he was on the verge of finding stability, someone unexpectedly crashed his world down. Similarly, fate had different plans for Ravi Paul as he tried to bring peace between his mother and wife. We also get to read about the life and times of his parents Chand and Chandni. It is a heartfelt story about his background and how unfortunate events in his life changed his entire perspective towards women. Finally, we get to hear the story of marital abuse from Indu. Despite falling in love with Aman, Indu had her first molestation at a very young age. How will these three victims interact and be of use when faced together? Will they take revenge on their opposite genders or cooperate for the collective good?

This book will appeal to most readers since it has an insightful plot. The character events which follow after watching the movie PINK are related through an accident. But the importance that the movie carries on a personal level to each of these characters becomes clearer as one flips through the pages, getting carried back in time to different zones in the past. It is an insightful read where characters get abused by opposite genders yet go on to support each other during times of difficulty. Personal differences are set aside for the collective good and this notion in itself is praiseworthy.