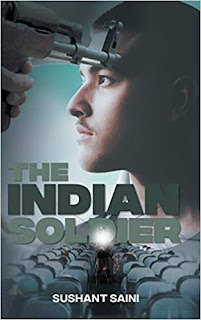 Author Bio: (from book) Sushant Saini is a software professional by day and an avid writer by night. He completed his schooling at Ryan International School, Noida. After that, he received his B. Tech degree from M. M. M Engineering College, Gorakhpur. After staying in Mumbai for three years, he moved to the USA. He has been living in Virginia for the last decade with his beautiful wife, Rashmi, and adorable twin girls, Maya and Meera. He loves spending time with family and friends. He loves traveling, New York, and Mumbai, being his favorite cities. Sushant also enjoys drinking, cricket, soccer, driving. Along with family, his friends are a very important part of his life. He plans to never stop writing.

Book Review: "The Indian Soldier" by Sushant Saini is a military fiction based on action and adventure of army life. This book is a reminder of the valiance and bravery of our brave soldiers who protect us against all odds. It is sad and unfortunate that while these brave men defend the borders, we constantly keep bickering amongst ourselves in the name of religion, caste, color, and self-interest. This book will surely act as an eye-opener for everyone out there criticizing the army!

Arjun, the protagonist of the story, gets a chance at both IIT and the Army. His patriotism forces him to walk in the footsteps of his late grandfather. A proud grandmother along with his parents drop him at the army Academy where Arjun spends formidable years in training and also making three inseparable friends for life. His quick on-spot decision-making abilities on becoming a soldier promote him to the Team-A, a secret organization of elite personnel tasked to carry out daunting operations. Arjun earns the nickname of Ironman for his bravery and courage. His schedule and secret identity cost him at a personal level where he fails to attend the funeral of his beloved grandmother among other important functions.

Eventually, a terrorist attack and the media plus public reaction to the incident changes everything for Arjun. It is at this point that some divine intervention or rather family intervention from divinity helps things to get back on track. A remarkable realization will strike readers as they turn the pages to find out the level of personal sacrifice behind every soldier's patriotism. This book will appeal to action and adventure book lovers as they turn the pages to one last plane hijacking mission of Arjun before he signs off as a bachelor!