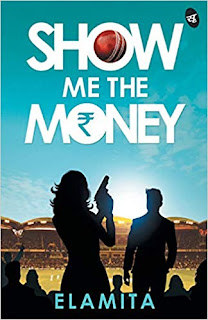 Author Bio: (from book) Elamita lives with the belief that the ultimate happiness is found when you match your heartbeat with the beat of the universe, and your nature with Mother Nature. A profound observer of her surroundings, people and their whereabouts stimulate her subconscious thought process, which she pens down in her stories. Writing short stories, poems, songs and memoirs has been her passion since she was 8. She holds a Bachelor’s degree in Economics and Master’s in Human Resource Management.

Book Review: "Show Me The Money" by Elamita is a work of Indian fiction bordering around the game of cricket and the many nuances involved in the black market behind the game, like bookmaking and betting against odds.  The story is a realistic representation of the actual world since it draws references to many real-life cricket gaming trophy cups and incidences of betting, influenced by the underworld as reported in the news during the past two decades. Hence, readers get ample time to grasp the flow of event narration.

Gourav, Nitin, Rajeev, and Amit are four inseparable friends who find solace in betting against odds while cricket matches are held throughout the year. What started as a passion soon finds a place into their needs. However, while some friends get busy in life leaving the country for work, some fall deeper into the trap. Gourav soon finds himself surrounded by new friends who have a significant connection with the underworld. Inspired by need, habit, and the lust for money, Gourav uses his cousin Vivek, a fairly established player in the Indian cricket team, to drive his bookmaking business. But alas! It is too late to turn back when he realizes it is time to quit and concentrate on his chemist shop. Gourav is sacrificed and the quest for revenge falls upon his wife Shalini. Can she succeed? Or will she succumb to the underworld as well?

This book will appeal to cricket fanatics and readers interested in thriller stories centered around sports. The author has done a commendable job fusing crime, thriller, mystery, and romance into a plot that takes us to Malaysia, Dubai and various parts of India. The story is divided into many parts which help the readers to grasp the events. The last part may draw some criticism stemming from the fact that the process of revenge extracted appeared superhuman considering the limitations of a citizen. But that does not deter the readers into appreciating the extensive emotions the author has laid behind crafting such a beautiful story.