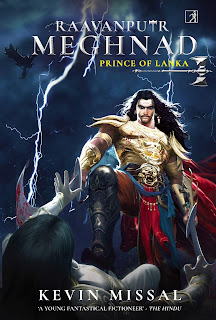 Author Bio: (from book) Kevin Missal is a graduate of St. Stephen’s College, New Delhi. His first book of the Kalki Trilogy, Dharmayoddha Kalki: Avatar of Vishnu, became a national best-seller and received praise from newspapers such as Millennium Post and Sunday Guardian and was termed as "2017’s mythological phenomenon". The second book in that series Satyayoddha Kalki: Eye of Brahma released in November 2018 to great praise as well, and has been steadily climbing the charts. The third and final book in the trilogy is due later this year. Kevin loves reading, watching films, and building stories in his mind. He lives in New Delhi.

Book Review: "Raavanputr Meghnad" by Kevin Missal is a mythological fiction based on the life of Meghnad, prince of Lanka, from the Indian epic 'Ramayana'. While the book in itself is not an accurate tale of Meghnad a.k.a. Indrajit, it serves as an entertaining interpretation and re-imagination by the author. We are thrust into the world of Illavarti inhabited by Devas, Asuras, Danavs, Manavs, Pisach, Vanars, people of Naaglok and a host of other fictional tribes and characters who play a pivotal role in shaping a coherent narrative from religious texts.

There are more than one storyline being narrated in this book. We have Raghav's quest to bring back his abducted wife, Sita; Suparnika's tale of unrequited love and revenge upon her own kind; Sugreev's ascension to the throne; Ravan's backdrop and crimes; and finally Meghnad's quest to become one of the greatest warriors, tale of his first love - Prameela from Naaglok, and his realization behind the truth of the ensuing war, all the while pondering upon what is right and what is wrong. The explanation behind the science of how the 'astras' or weapons worked, added with a hint of nuclear power supremacy, is a commendable fictional thought by the author. We are thrust into a beautiful story where we feel pain, pity, anger, happiness and eventually sympathy for all the characters in the climax when the clouds of doubts become clearer and misunderstandings start getting settled - but alas it was too late!

What was the secret behind Meghnad's strength? Why was her aunt plotting against her own brother, Raavan? Under what pretext was Sita abducted? These are some of the few intriguing questions answered in the book while the reader embarks on a journey of adventure, love, redemption, betrayal and a fight to restore faith. All these actions packed up in plots, sub-plots, and twists of praiseworthy scale while we get to know more about 'Ramayana' from the point of view of Raavanputr Meghnad, who was just a good son having a bad father!