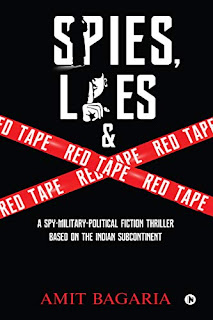 Author Bio: (from book) Bengaluru-based Amit Bagaria is a serial entrepreneur turned serial author. He has written nine nonfiction books since November 2017 and has sold almost 7,000 copies since April 2018. He has received a lot of praise from dozens of book lovers and serial book reviewers for five of those nine titles. This is his first fiction novel.

Book Review: "Spies, Lies & Red Tape" by Amit Bagaria is a political thriller based on the Indian subcontinent. A lot of geopolitical and military research has been done by the author which deserves appreciation. This book paints a realistic picture of how army intelligence works during modern times. A fast-paced adventure where readers get to know about spy networks, army operations and military tactics across borders. Economic and trade relations between countries are what really matters in the end.

The book begins with the shocking revelation of a plane hijack consisting of none other than the Indian PM. It sets the motion for readers as we almost get a panic attack speculating the events that must follow after this news. On the other hand, we encounter three parallel intriguing sub-plots occurring simultaneously during the main action. These sub-plots are mainly related to the extensive spy networks that a country has in other countries. We are enlightened with the different procedures of how information is extracted from suspects and valuable position holders alike in the government. Since character names are many, the author has given a list of names in the first few pages along with a backdrop of the events that follow. Who hijacked the PM? Was she a deserving candidate? Will there be any retaliation against the 'actual' culprits? How far is the army successful in maintaining its sovereign belief among the people?

This book will appeal to a lot of readers who love to read political thrillers having elements of crime and mystery. The action is fast-paced and believable. There is a lot of patriotism behind this writing, both in the author and among the characters who remain loyal to their respective countries. The plot should serve to entertain any reader and instill within him a sense of pride since good people can really step up to turn the tides in face of a crisis. One must definitely go through this book to witness how India emerges into a superpower through trade, diplomacy and military tactics.