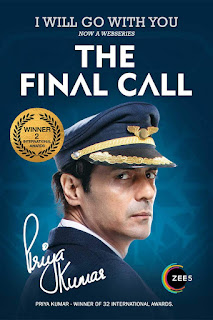 Author Bio: (from book) Priya Kumar is an Internationally Acclaimed Motivational Speaker and Bestselling Author of 10 Inspirational Books. She has worked with over 1500 multi-national corporates across 46 Countries and has touched over 2 million people through her workshops and books. She is the only Indian Author who has won 32 International Awards for her books.

Book Review: "I Will Go With You" by Priya Kumar is a contemporary fiction inspired from the Malaysian Airlines MH370 tragedy but with finer details of imagination which forces you to question a lot of relevant things. The book has been adapted into a popular web series "The Final Call" streaming on ZEE5. The author has used an endangered setting to bring the best and worst out of man's fears. A gloomy yet thrilling atmosphere lingers over 300 passengers some 35000 feet above sea level.

Robert is the captain of the flight in this story who has decided to end his life by committing suicide. An ex-army pilot turned commercial airline pilot, his life has been gloomy lately after losing his family in an accident. He is, therefore, in turmoil mid-air trying to reason whether he should plunge this aircraft into the waters. Inside the flight are many people, 4 of whom are significantly evolved in their consciousness and understanding of the world. Amidst plans of Robert gone wrong, the panic among the flight crew and staff, the turbulence in the air and the looming threat of death, Muttu, Paul, Sarah and Jim will take on the reins of how does it truly feel to be alive and what meaning does life carry if they were to die. The story is an understanding of the calmness, desires, regrets, and wants which pervade the clouds of human emotions in the mind when a person approaches his impending end.

We reap as we sow; Karma affects us all; It is never too late to mend - are some of the striking lessons which these pages have to offer. Does the efforts of Ground Control and ATC pay off? Is Robert ready to negotiate? How will 300 passengers be saved? What happened to the other co-pilots and assistants? Read this suspense-filled drama of life and death to get answers one might seek throughout their life but eventually end up getting from an astrologer, a billionaire, an aspiring writer, and a seventeen-year-old kid!