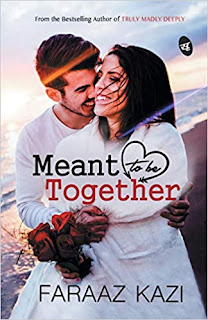 Author Bio: (from book) The recipient of the YCOF National Excellence Award and the winner of the National Debut Youth Fiction Award 2013, Faraaz Kazi is also called as the Nicholas Sparks of India. A digital entrepreneur and a three-time post-grad, Kazi has previously authored three bestselling titles in India - Truly Madly Deeply (2010), The Other Side (2013) and LOVE (2015).

Kazi is a fellow member of the esteemed Film Writers Association of India and an active member of The International Horror Writers Association. Truly Madly Deeply, his debut mainstream romance novel, is the only Indian book to be nominated in seven categories of the Goodreads annual choice awards, apart from being the first Indian novel to win the 'Best Debut (Romance)' during the same awards. It is also the only Indian book in the 'Top 100 YA Global Fiction' list. The Other Side, which Kazi co-authored with Vivek Banerjee, remains the highest selling Indian horror title till date. Kazi is a voracious reader and counts singing as his second love.

Book Review: "Meant to be Together" by Faraaz Kazi is a romance fiction which is based on the popular belief by many cultures that one's destiny is pre-written and we cannot really escape our fate. This belief does not prevent us from making our journey smooth and worthwhile, utilizing good faith in making life positively memorable. There are our friends, family and loved ones who will always help us to achieve our goals. This story is based on a few such realizations that make this world a better place to live in - full of hope!

Preeti had a troubled childhood and some real bad luck in making supportive friends or getting the presence of her family due to her ailing father and caring mother, staying away from her due to health issues. As a result, her elder brother meant the world to her, supporting her the most during her formative years. But she loses her brother in an accident which leaves a deep scar within her. Everything gets reflected on her paintings when she moves to Mumbai to start a new work-life away from her past. Preeti falls in love with Sameer while working at Mumbai in a dramatic way but discovers later a deep secret which leaves her in ruins once again. But their love story had already gone deep by that time and it pains her to leave the city back home, even taking a hiatus on an international trip. What is that secret? Why did Sameer or his friends not warn Preeti of it before? Do they ever meet again? Can love happen with the same person twice? Or was it just all a big misunderstanding?

This story will appeal to a lot of people and is the perfect weekend read as it is so much more relatable to the happenings of the present generation of youth. A reminder of how far we can go into the voyage of getting back our loved ones. A story wrapped in love, friendship, loss, regret, hatred - everything that a reader could ask for!