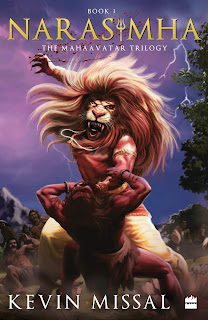 Author Bio: (from book) Kevin Missal wrote his first book at the age of 14, and at 22, the St Stephens graduate is a bestselling author and a full-time writer, with the first two books in his Kalki series being runaway successes. Dharmayoddha Kalki: Avatar of Vishnu and its sequel Satyayoddha Kalki: Eye of Brahma have sold one lakh copies in under a year. Kevin loves fantasy fiction and has always been a fan of mythology. His books have been featured in publications like The Sunday Guardian, The New Indian Express and Millenium Post. He lives in Gurugram and he can be contacted at kevin.s.missal@gmail.com

Book Review: "Narasimha (The Mahavatar Trilogy Book 1)" by Kevin Missal is a mythological fiction based on the fourth avatar of Lord Vishnu - Narasimha avatar. While the book in itself is not an accurate tale of Lord Narasimha, it serves as an entertaining interpretation and re-imagination by the author. We are thrust into the world of Illavarti inhabited by Devas, Asuras, Danavs, Simhas and a host of other fictional tribes and characters who play a pivotal role in shaping a coherent narrative from religious texts.

Prahlad is the Asura prince who is in search of faith - a trait looked down upon among his people. While his father Hiranyakashyap and elder brother Anuhrad are off fighting against the Deva Lord Indra in a decade long war Prahlad must choose between saving the empire his father built and the Vishnusena trying to tear down the Asura empire. In a land shadowed by war and blood, there lies a prophecy that the chosen one of Lord Vishnu will arise at the end of every Yug to restore Dharma and faith among people. Narasimha is reluctant to fulfill this prophecy as he avoids confronting his destiny for a past he wants to forget -  a past which apparently started all the mayhem. But events do not shape in favor of peace as Hiranyakashyap, the Asura King, is close to discovering the armor of Lord Brahma for near-immortality motives, while his son Anuhrad and nephew Andhaka brew sinister plans to capture the trident of Lord Shiva, a nuclear weapon capable of unimaginable destruction.

Will Prahlad be saved if his people come to know he's a traitor? Will Narasimha find redemption? Will Hiranyakashyap be able to kill Lord Indra? These are some of the few intriguing questions answered in the book while the reader embarks on a journey of adventure, love, redemption, betrayal and a fight to restore faith. All these actions packed up in plots, sub-plots, and twists of praiseworthy scale along with a promise of a sequel from the author.